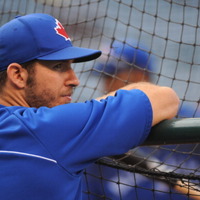 Mark DeRosa Net Worth: Mark DeRosa is a former American professional baseball player who has a net worth of $12 million. Mark DeRosa was born in Passaic, New Jersey, in 1975. He played college football and baseball at the University of Pennsylvania, where he graduated from the Wharton School in 1997. The Atlanta Braves drafted him with the 212th overall pick during the seventh round of the 1996 Major League Baseball draft. He made his pro debut on September 2, 1998 with the Braves. He played in Atlanta from 1998 until 2004. DeRosa later played with the Texas Rangers from 2005 until 2006, the Chicago Cubs from 2007 until 2008, the Cleveland Indians in 2009, the St. Louis Cardinals in 2009, the San Francisco Giants from 2010 until 2011, the Washington Nationals in 2012, and the Toronto Blue Jays in 2013. The right-handed utility player last appeared for the Blue Jays on September 29, 2013. He finished his pro playing career with a .268 batting average, exactly 100 home runs, and close to 500 runs batted in. After his retirement, he began working as an analyst with MLB Network in the studio. DeRosa has a daughter with his wife, ex-model Heidi Miller. He and his family live in Atlanta, Georgia.