What is Mariano Rivera's Net Worth and Salary?

Mariano Rivera is a retired Panamanian professional pitcher in Major League Baseball who has a net worth of $80 million. Known as "Mo" or "Sandman" by his fans, Rivera spent his entire career playing for the New York Yankees. He played his first MLB game in 1995 and eventually retired in 2013. Playing primarily as a relief pitcher, Mariano was the favored closing pitcher for the Yankees. He is a 13-time All-Star who has won the World Series five times. In addition, he has more saves and games finished than any other MLB player in history. He was inducted into the Baseball Hall of Fame in 2019 and was the first player to be elected unanimously.

Rivera was especially well-known for his sharp-moving, cut fastball that traveled at around 95 miles per hour. These pitches were incredibly difficult to hit, and they regularly broke bats. This made him a key part of the Yankee's success in the late 90s to early 2000s. He is also known for his uncommon longevity, continuing to play professionally for much longer than the average closing pitcher.


During his 19 professional seasons, Mariano earned $170 million in salary alone. He also earned tens of million in additional income thanks to endorsements.

Mariano Rivera was born on November 29th of 1969 in Panama City, Panama. He was then raised in the modest fishing village of Peurto Caimito alongside three siblings. His father was a captain of a fishing boat, and the family was not financially well-off. Soccer was Rivera's favorite sport while growing up, although he eventually quit at the age of 17 after a series of injuries. A year later, he joined a local amateur baseball team.

He had already dropped out of school by ninth grade, and he had serious doubts about his future as a fisherman due to a number of accidents on his father's boat – some of which were deadly. Despite having no training as a pitcher, he took the position and immediately impressed his coach. In 1990, the New York Yankees heard about him and signed him as an amateur free agent.

On February 17, 1990 Mariano signed an amateur free agent deal with the Yankees for $2,000. Upon signing the contract, he was whisked off to play for a Yankees minor league team. He had never left home and had never been on a plane.

It would take five years before Mariano was ready to make his major league debut.

Mariano's signature fastball was a "cutter" that tended to move laterally towards left-handed hitters. It exhibited the qualities of a slider but with the speed of a fastball. Because of the fact that the ball tended to move laterally very late, batters were prevented from hitting it on the sweet spot of their bats. This led to weak contact and the frequent breaking of bats. During one season alone, Rivera broke 44 bats, leading some observers to call Mo's pitch a "buzzsaw." Some have claimed that Mariano's long fingers and loose wrist allowed him to create this type of unique pitch. He also bent his thumb at the knuckle and tucked it underneath the ball, preventing the thumb pad from affecting the ball's spin. 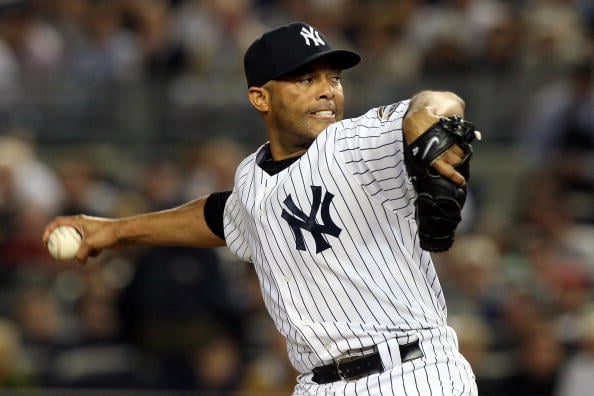 Rivera "accidentally" discovered the cutter in 1997 during a warmup with a teammate. After this point, he used the cutter almost exclusively, throwing a high number of strikes throughout the rest of his career. He also became very accurate with his pitches, something his catchers always appreciated. Batters often stated that Mo's smooth delivery resulted in a false sense of security, leading them to believe that the pitch would be much easier to hit than it actually was. In addition, opposing teams often sent right-handed batters against Rivera, because they believed that the lateral movement would be disadvantageous to left-handed hitters. This defied the conventional tactic, which was to put left-handed batters up against right-handed pitchers. Rivera was also extremely athletic, even into his 40s.

Mariano Rivera also tended to have a psychological effect on his opponents. This was due in part to his foreboding entrance song during the later stages of the game, which was "Enter Sandman" by Metallica. In addition, Rivera exhibited an extremely calm, almost emotionless demeanor on the baseball diamond. High-pressure situations seemed to have no effect on him, and many of his teammates described him as one of the most mentally tough players they ever worked with. He once explained the importance of not letting emotions affect your actions. Rivera won the World Series in 1996, 1998, 1999, 2000, and 2009.

Mariano first met his wife Clara in elementary school, and they were married in 1991. Over the course of their relationship, they have had three sons together. In 2019, a Panamanian woman accused Rivera of not paying child support to two children he allegedly fathered with her out of wedlock. Mariano called these claims "unfounded."

In 2019, it was reported that Mariano Rivera's home in Tampa was on the market for $3.5 million. He had the home custom built back in 2004 for just $710,000, and it features seven bedrooms, 9,250 square feet of living space, a brick courtyard, a pool with a waterfall, a billiard room, and a movie theater. He and his wife eventually sold this residence for $3.2 million.

In 2020, his home in the affluent community of Rye, New York also hit the market with an asking price of $3.995 million. He originally purchased the residence in 2006 for $5.7 million, which suggests that he and his wife were willing to accept a significant loss on this property. It features 13,000 square feet of living space, nine bedrooms, a pair of turrets, a second-floor terrace, a double staircase in the entry hall, a wood-paneled sports bar, a home theater, a billiards room, an outdoor pool, and a basketball area. It was reported that Rivera and his wife were planning to sell this home and relocate to a newly-built residence in White Plains. In June 2022, Mariano finally accepted $3.783 million for the home, a more than $2 million loss compared to his purchase price. The buyers were actually already living in the home, having been renters for about a year. Mariano had been charging $19,000 per month in rent. 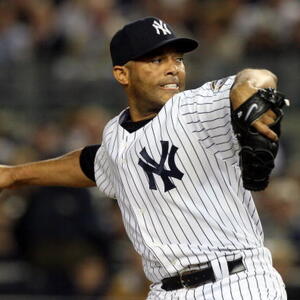