Marco Scutaro Net Worth: Marco Scutaro is a Venezuelan professional baseball player who has a net worth of $18 million. Marco Scutaro was born in San Felipe, Yaracuy, Venezuela, in 1975. He made his Major League Baseball debut on July 27, 2002, as a member of the New York Mets. Scutaro played with the Mets from 2002 until 2003 when he joined the Oakland Athletics, where he played from 2004 until 2007.

From there, he became a member of the Toronto Blue Jays in 2008 and 2009 and later the Boston Red Sox in 2010 and 2011. He had a brief stint with the Colorado Rockies in 2012 before joining the San Francisco Giants later that season. Scutaro has played in the Bay Area ever since, and is a current member of the team as the fall of 2014. He has won two World Series Championships as a member of the Giants (2012, 2014) and was named the 2012 NLC MVP. Scutaro earned his first MLB All-Star honor in 2013. Through the 2013 season, he has amassed a .278 career batting average to go along with 1,354 hits, 77 home runs, and 509 runs batted in. The right-handed batter is an infielder for the Giants. He was featured on the documentary "A Player to be Named Later", which was released in 2005. 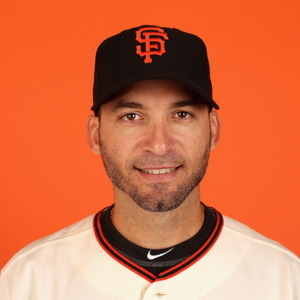