What is Madison Bumgarner's net worth?

Madison Bumgarner is an American professional baseball player who has a net worth of $40 million.

Madison Bumgarner was born in Hickory, North Carolina in August 1989. Bumgarner is a starting pitcher who bats right and throws left handed. His high school team won the 2007 4A Stat Championship as a senior and he was named MVP of the playoffs and Gatorade North Carolina Player of the Year. Bumgarner committed to the University of North Carolina but was drafted by the San Francisco Giants #10 in the 2007 MLB Draft. Madison pitched in the minor leagues before making his MLB debut for the Giants in September 2009. He has played for the San Francisco Giants from 2011 to 2019. He signed with the Arizona Diamondbacks in December 2019.

During his career he has won three World Series Championships in 2010, 2012 and 2014. He is also a four time MLB All-Star. He won the National League Championship Series MVP in 2014. Bumgarner holds MLB records for hitting two career grand slams by a pitcher (and for 2 grand slams by a pitcher in a single season). He also holds a record for hitting a grand slam with his battery mate Buster Posey in July 2014.

Contracts: Madison signed a six year deal with the Giants worth $35.56 million in 2012. In 2009 he signed a five-year $85 million deal with the Diamondbacks. 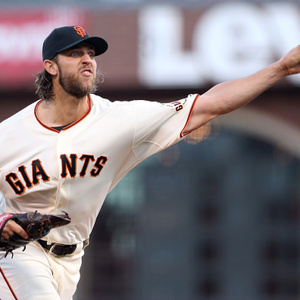