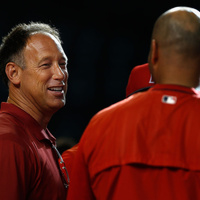 Luis Gonzalez net worth: Luis Gonzalez is an American former professional baseball player who has a net worth of $40 million dollars. Luis Gonzalez was born in Tampa, Florida, and went on to play baseball at the University of South Alabama. While at Alabama, he earned All-Freshman Second Team honors from Baseball America. The Houston Astros drafted him in 1988, and he made his Major League debut in 1990. He played moderately well for the Astros, and was then traded to the Chicago Cubs in 1995. After a season with the Cubs, he went on to play another season with the Astros, and a season with the Detroit Tigers. He finally seemed to hit his stride when he signed with the Arizona Diamondbacks. While with the Diamondbacks, he was a 5-time All-Star selection, a Silver Slugger Award winner, the Home Run Derby winner in 2001, and it was his hit that gave the Diamondbacks their first World Series Championship in 2001. He remained with the team until 2006, then spent on season with the Los Angeles Dodgers and another with the Florida Marlins, before retiring in August 2009.