Luis Castillo Net Worth: Luis Castillo is a former professional baseball player who has a net worth of $20 million. Born in San Pedro de Macoris, Dominican Republic, in 1975, Luis Castillo made his Major League Baseball debut with the Florida Marlins on August 8, 1996. He played with the Marlins for nearly a decade before joining the Minnesota Twins from 2006 until 2007.

Castillo finished out his MLB career with the New York Mets from 2007 until 2010, last appearing on October 3, 2010. After being released from the Mets ahead of the 2011 season, he landed a minor league deal with the Philadelphia Phillies, but was later cut. He is a three-time MLB All-Star (2002, 2003, 2005) and a three-time Gold Glove Award winner (2003, 2004, 2005). Castillo led the National League in stolen bases twice in 2000 and again in 2002. He won one World Series championship as a member of the Marlins in 2003, defeating the New York Yankees four games to two. Castillo was a switch-handed batter who threw right from the second base position. He finished his career with a .290 batting average to go along with 28 home runs, 443 runs batted in, and 370 stolen bases. Castillo and his wife have two children together: Louis, Jr., who was born in 2001, and Adonai, who was born eight years later in 2009. 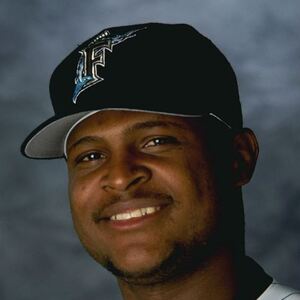