Lou Gehrig net worth: Lou Gehrig was an American professional baseball player who had a net worth of $3 million at that time of his death (adjusted for inflation). He is best known for winning six World Series with the New York Yankees and for being one of the most famous people to suffer from ALS, which is today commonly referred to as Lou Gehrig's disease.

Lou Gehrig was born in Yorkville, Manhattan, New York in June 1903 and passed away in June 1941. He was a first basemen who batted and threw left handed. Gehrig made his Major League Baseball debut for the New York Yankees in 1923 and played for the team his entire career through 1939. He was an All-Star seven years in a row and a six time World Series champion. Gehrig was the American League MVP in 1927 and 1936 and won the Triple Crown in 1934. He was a three time AL home run leader and five time AL RBI leader. He hit four home runs in one game in 1932 and served as the Yankees captain from 1935 to 1939. Gehrig is a member of the Baseball Hall of Fame and his #4 was retired by the New York Yankees. Lou Gehrig passed away on June 2, 1941 at 37 years old from ALS which was later nicknamed Lou Gehrig's disease. 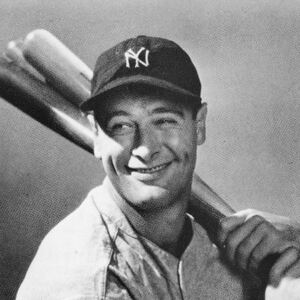