Larry Walker Net Worth: Larry Walker is a Canadian former professional baseball player who has a net worth of $45 million. Larry Walker was born in Maple Ridge, British Columbia in December 1966. He was part of the Canadian team at the 1984 World Youth Championships. He caught the eye of the Montreal Expos scouting director who signed him for $1,500.

Larry made his major league debut for the Expos in August 1989. He played for the Expos until 1994 and signed with the Colorado Rockies in 1995. In 2004 he was traded to the St. Louis Cardinals where he finished his career. Walker was a right fielder who batted left and threw right handed. During his career he was a five time All-Star and seven time Gold Glove Award winner. Walker also won three Silver Slugger Awards and three National League batting championships. In 1997 he was named National League MVP and was the NL home run champion. Larry was Team Canada's hitting instructor for the 2009 World Baseball Classic. He was inducted into the Canadian Baseball Hall of Fame and as of 2011 has been eligible for induction into the National Baseball Hall of Fame. 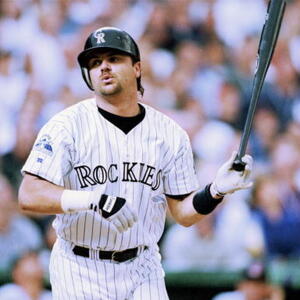