How much is Lance Berkman Worth?

Lance Berkman is an American professional Major League Baseball player who has a net worth of $60 million. Lance Berkman has earned his net worth as a first baseman for the St. Louis Cardinals of Major League Baseball. Lance was born on February 10, 1976 in Waco, Texas, after graduating from Canyon High School located in New Braunfels, Texas in 1994 he attended Rice University where he played on the Owls baseball team. In 1997 he was named the National College Player of the Year; Berkman played under the leadership of the legendary Wayne Graham and was named a first team All-America by several successful magazines such as Collegiate Baseball, Baseball America and The Sporting News. As one of the Baseball America honorees he was invited to have dinner with President Bill Clinton at the White House. Also in 1997 he led the Rice Owls to their first College World Series appearance, Berkman has also been a team member for the Houston Astros, and the New York Yankees. Lance also known as "Fat Elvis" and "The Big Puma" would like to be a baseball coach for the University of Texas at Austin when he retires from playing MLB. He is married to wife Cara, and they have four daughters, the family currently lives in Houston and he is very outspoken about his religious beliefs. 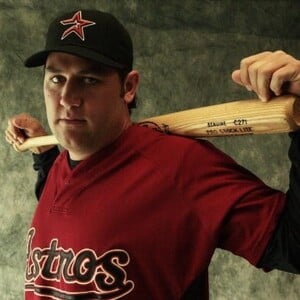