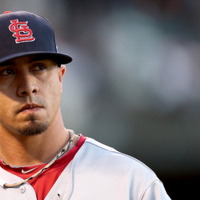 Kyle Lohse Net Worth and salary: Kyle Lohse is an American retired professional baseball player who has a net worth of $38 million. Kyle Lohse was born in Chico, California in October 1978. Lohse was a pitcher who batted and threw right handed. Kyle played baseball at Hamilton Union High School and Butte College. He was drafted by the Chicago Cubs in the 29th round of the 1995 Major League Baseball draft. Lohse was traded to the Minnesota Twins in 1999 and made his major league debut for the Twins in June 2001. He played in Minnesota until 2006 when he was traded to the Cincinnati Reds. Lohse was traded to the Philadelphia Phillies in 2007 and signed with the St. Louis Cardinals for a one year $4.25 million deal in 2008. Later that year he signed a four year extension worth $41 million. In 2013 Lohse joined the Milwaukee Brewers for a 3 year $33 million deal. He then played his final three season with the Brewers. Lohse's career accomplishments include winning a World Series Championship in 2011 and leading the National League in winning percentage in 2012. He also has had a perfect fielding percentage eight times. He is a member of the Nomlaki tribe and in 2014 was one of only three non-Hispanic Native American players active in MLB. During his career, Kyle earned $89 million in salary before taxes.