Kirk Gibson net worth and salary: Kirk Gibson is an American former professional baseball player and manager who has a net worth of $15 million. Kirk Gibson was born in Pontiac, Michigan in May 1957. He was an outfielder who also played wide receiver in football at Michigan State University. Gibson was drafted in the 1st round of the MLB Draft by the Detroit Tigers and also in the 7th round of the NFL Draft by the St.

Louis Cardinals. Gibson played for the Tigers from 1979 to 1987 and then played for the Los Angeles Dodgers from 1988 to 1990 after being granted free agency. In 1991 he played for the Kansas City Royals and in 1992 for the Pittsburgh Pirates. Gibson finished his playing career with the Detroit Tigers from 1993 to 1995. He won two World Series Championships, one in 1984 with the Tigers and a second with the Dodgers in 1988. Gibson was named National League MVP and won a Silver Slugged Award in 1988. In 1984 he was named American League Championship Series MVP. Gibson became a coach with the Detroit Tigers from 2003 to 2005 and with the Arizona Diamondbacks from 2007 to 2010. From 2010 to 2014 he served as manager for the Diamondbacks. Gibson also spent five years as a television analyst in Detroit. He is remembered for hitting a home run off of Dennis Eckersley in Game 1 of the 1988 World Series. 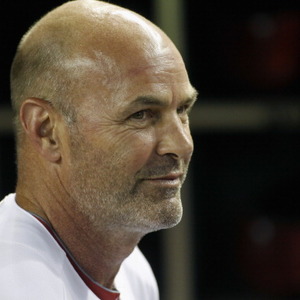