Kevin Appier Net Worth: Kevin Appier is a former American professional baseball player who has a net worth of $27 million. Born in Lancaster, California, in 1967, Kevin Appier is a right-handed pitcher. He attended Antelope Valley High School in his home town and went on to play baseball at California State University Fresno.

The Royals drafted Appier with the ninth overall pick during the first round of the 1987 amateur draft. He made his Major League Baseball debut on June 4, 1989 as a member of the Royals when he was 21 years old. The six-foot-two, 180-pound pitcher played with the Royals until 1999 before he played with the Oakland Athletics from 1999 until 2000, the New York Mets in 2001, and the Anaheim Angels from 2002 until 2003. In 2003, Appier re-joined the Royals, and he made his last MLB appearance with the Royals on April 23, 2004. Appier amassed a 169-137 career win-loss record to go along with a 3.74 earned run average and 1,994 strikeouts. Over the course of his career, he averaged 14 wins and eleven losses per season. He earned one All-Star berth in 1995. Appier was part of the Angels' 2002 World Series Championship as a starting pitcher. 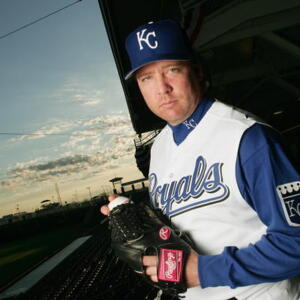