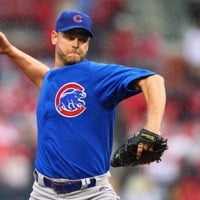 Kerry Wood Net Worth: Kerry Wood is a retired American baseball player who has a net worth of $40 million dollars. In his pro career as a pitcher, he played for three MLB clubs, Chicago Cubs, Cleveland Indians, and New York Yankees. Born Kerry Lee Wood on June 16, 1977 in Irving, Texas, he achieved his first success in the sport while playing high school baseball. It was in 1995 that he was drafted by the Chicago Cubs as the fourth overall selection in the Amateur Draft. Next, he spent three years playing in the Minor Leagues before rising to prominence. He was just a twenty-year old rookie when he completed twenty strikeouts in a one-hit shutout against the Houston Astros in 1998. According to some, Wood's feat may be the greatest single-game pitching performance in MLB history. Thus, he became co-holder of the MLB record for strikeouts in a single game (20) and got the nickname Kid K. The same year, Wood was also named the 1998 National League Rookie of the Year. He would go on to record over 200 strikeouts in 4 out of his initial 5 seasons. Furthermore, he broke several MLB strikeout records and was twice named an All-Star despite being injured several times throughout his career. After fourteen years of professional baseball play, Wood would eventually retire on May 18, 2012.