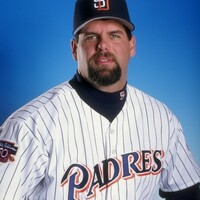 Ken Caminiti Net Worth: Ken Caminiti was an American professional baseball player who had a net worth of $12 million. Ken Caminiti was born in Hanford, California, in 1963. The Houston Astros chose him during the third round of the amateur draft in 1984. He worked his way through the club's farm system before making his professional MLB debut on July 16, 1987. He played with the Astros until 1994 when he became a member of the San Diego Padres from 1995 until 1998. Caminiti later played for the Astros a second time from 1999 until 2000 before joining the Texas Rangers and the Atlanta Braves in 2001. Caminiti last appeared in an MLB game on October 7, 2001 with the Braves. He finished his pro playing career with a .272 batting average to go along with 239 home runs and 983 runs batted in. He was a three-time MLB All-Star (1994, 1996, 1997) and won the National League MVP Award in 1996. Caminiti was a three-time Gold Glove Award winner from 1995 through 1997, and won a Silver Slugger in 1996. He was married to his wife, Nancy Smith, from 1987 until their 2002 divorce. They had three daughters together. Caminiti publicly battled a substance abuse problem throughout his career. He died in The Bronx, New York, on October 10, 2004, at the age of 41, from a cocaine and heroin overdose.