He was able to save 14 games that season and over the next five seasons he had a record of 42-44 with 40 saves. Kelvim Escobar earned the second place spot on the Blue Jays all-time single season saves list with 38 games saved. Escobar played for the Toronto Blue Jays from 1997-2003. At the beginning of the 2004 season, Kelvim Escobar signed a three-year, $18.75 million deal with the Los Angeles Angels of Anaheim. While he was an Angel from 2004-2009, much of his career in Anaheim was hampered by injuries. Kelvim Escobar's breakout year with the Angels was in 2007, when he has a 3.40 ERA going 18-7. Kelvim Escobar made his last MLB appearance on June 6, 2009 for the Los Angeles Angels of Anaheim. 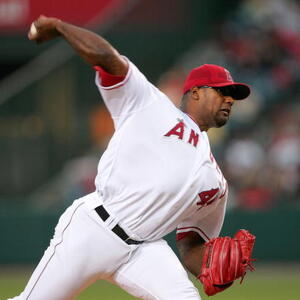