What Is Juan Soto's Net Worth and Salary?

Juan Soto is a Dominican professional baseball player who has a net worth of $10 million. Nicknamed "Childish Bambino," Soto is an outfielder, and he signed with the Washington Nationals in 2015 as an international free agent. Juan played in his first Major League Baseball game in May 2018, and his performance that season led to him being runner-up for the National League Rookie of the Year Award. He has won the Silver Slugger Award (2020 and 2021), and he won the National League's batting title in 2020 with a .351 average.

Soto was instrumental in the team's first-ever World Series win in 2019, and he was selected as an all-star in 2021 and 2022. In April 2022, he became the youngest player to hit 100 home runs in Nationals history and the eighth-youngest in the history of the MLB. Before the 2021–22 MLB lockout, the team offered Juan a 13-year contract extension worth $350 million, but he declined the offer because he thought "the best option is to go year by year and wait for free agency." In March 2022, he avoided arbitration with the Nationals by agreeing to a $17.1 million contract, but a few months later, he reportedly turned down a 15-year contract extension worth $440 million.

Juan Soto was born Juan José Soto Pacheco on October 25, 1998, in Santo Domingo, Dominican Republic. He is the son of Belkis Pacheco and Juan Soto, Sr., and he has a younger brother named Elian. Juan Sr. is a salesman who played the position of catcher in a local baseball league. Elian is an outfielder and third baseman, and he has entered into a verbal agreement as an international free agent to sign a contract with the Nationals when he becomes eligible in 2023.

In July 2015, Soto, an international free agent, signed a $1.5 million contract with the Washington Nationals, and his professional debut took place with the Gulf Coast League Nationals in 2016. According to milb.com, "The 17-year-old outfielder led the league with a .361 average, .550 slugging percentage, .960 OPS and 93 total bases in 45 games for the Nationals' GCL affiliate." Juan's performance during his first season earned him the Gulf Coast League MVP award, and he was promoted to the Class A-Short Season New York-Penn League team the Auburn Doubledays in September 2016. In 2017, Soto began playing for the Class A South Atlantic League team the Hagerstown Suns, but he ended up on the disabled list after injuring his ankle during a May 2nd game. He was ranked the Nationals' #2 prospect by "MLB Pipeline" in July 2017 and #42 on its list of the 100 best prospects overall. Juan did not play for the Suns again in 2017 after his injury, but he played in nine games with the Gulf Coast Nationals before he injured his hamstring and had to sit out the rest of the season. He briefly played for the Suns in 2018, but he was promoted to the Class A-Advanced Carolina League team the Potomac Nationals soon after the season began. After 15 games, he was promoted again, this time to the Class AA Eastern League team the Harrisburg Senators. Soto only played eight games with the Senators because the Washington Nationals needed him to replace injured outfielder/second baseman Howie Kendrick. 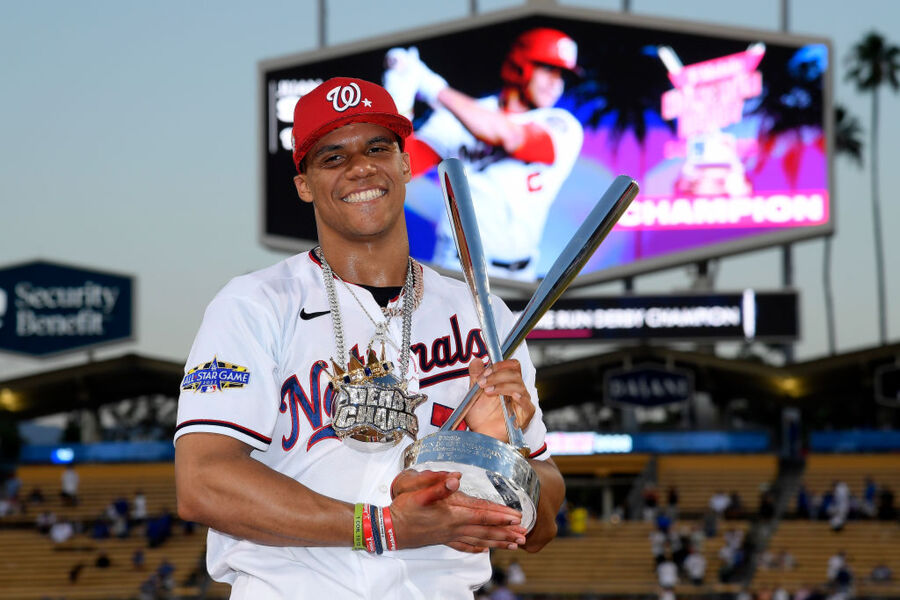 Juan played in his first major league game on May 20, 2018, at the age of 19 years and 207 days, making him the youngest player in the MLB. The next day, he became the youngest player in Nationals history to hit a home run as well as the first teenager to hit a home run in an MLB game since 2012. In June 2018, Soto was named the Nationals' top prospect by "Baseball America" and the #4 prospect in baseball overall. In September 2018, he stole three bases in a game against the Atlanta Braves, making him the youngest player to do so. He was named the NL Rookie of the Month three times in 2018 and set several teenage records, including most multi-homer games by a teenager (3) and most walks by a teenager (79). Juan hit 22 home runs that year, and he was the runner-up for NL Rookie of the Year. On August 19, 2019, he recorded his 100th extra-base hit, becoming the fourth MLB player to do so before his 21st birthday. He was the seventh player in the MLB to hit 30 home runs before turning 21, and in 2019, he helped the Nationals win the World Series against the Houston Astros. Soto and his teammate Stephen Strasburg were later named co-winners of the 2019 Babe Ruth Award, and Juan was selected for the All-MLB Second Team.

In July 2020, Soto tested positive for COVID-19 and had to miss a few games, and the following month, he was named National League Player of the Week after hitting home runs measuring 463 feet and 466 feet. During the 2020 season, he became the youngest player to win the National League batting title, and he received the Silver Slugger Award and was chosen for the All-MLB First Team. In April 2021, Juan was put on the injured list due to a left shoulder strain, and he was later named a National League All Star Team reserve for the 2021 All Star Game. He took part in his first Home Run Derby in 2021 and lost in the semifinal, but he won the following year. He is the second-youngest player to win the Home Run Derby; 1993's winner, Juan González, was just one day younger when he won. After the 2021 season ended, Soto was selected for the All-MLB First Team. He earned a National League Silver Slugger Award, and he was runner-up for the NL MVP award. In April 2022, Soto hit his 100th MLB home run, becoming the youngest player in Nationals history to do so, and he was later chosen for the 2022 Major League Baseball All-Star Game.

In 2021, Juan spent approximately $200,000 (his All-Star Game and Home Run Derby earnings) to sponsor Olympian baseball players, track and field athletes, and boxers from the Dominican Republic. He said of the decision, "I know where they all came from and what they have been through. The process we have to all go through is hard. We have to go from one side of the country to the other for practices. We had to go hours and hours without eating sometimes. We have to practice and have no proteins, or no shoes, or not the right clothing or equipment. So it's pretty tough to do that and still be motivated. What they did for the Olympics, it's just amazing." 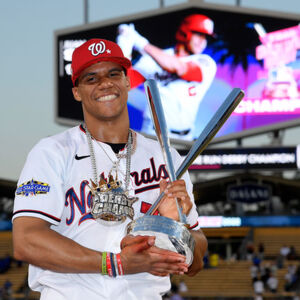