He made his major league debut for the Rangers in September 1989 and played for Texas until 1999. He played for the Detroit Tigers in 2000 and the Cleveland Indians in 2001. In 2000 Juan turned down a $140 million contract from the Tigers but later signed a one year $10 million deal with the Indians. He returned to the Texas Rangers in 2002 and signed a two year deal worth $24 million. He played for the Kansas City Royals in 2004 before finishing his career with the Indians in 2005. During his MLB career Gonzalez was a three time All-Star and two time American League MVP. He was a six time Silver Slugger Award winner and twice was AL home run champion. Juan was the AL RBI champion in 1988 and he won the Home Run Derby in 1993. 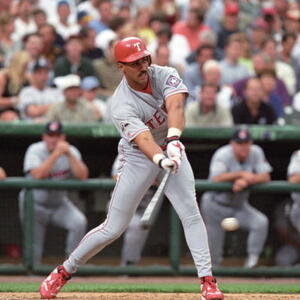