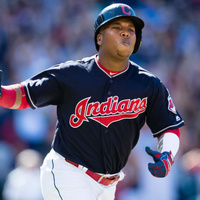 Jose Ramirez net worth and salary: Jose Ramirez is a Dominican professional baseball player who has a net worth of $8 million. Jose Ramirez was born in Bani, Peravia, Dominican Republic in September 1992. He is a third baseman who is a switch hitter and throws right handed. Ramirez made his Major League Baseball debut in 2013 for the Cleveland Indians. He was selected as an All-Star in 2017 and 2018 and won a Silver Slugger Award in both those seasons as well. Jose Ramirez was a member of the 30-30 club in 2018. He led the major leagues in doubles in 2017 when he became the 19th player to hit at least 56 in a season. In 2017 Jose Ramirez signed a five year contract for $26 million with the Indians. Through the 2018 season he had 87 home runs, 309 runs batted in, 93 stolen bases, and a batting average of .285.