Jose Mesa Net Worth: Jose Mesa is a former Dominican professional baseball player who has a net worth of $10 million. Born in Pueblo Viejo, Dominican Republic, in 1966, Jose Mesa made his Major League Baseball debut on September 10, 1987 for the Baltimore Orioles. The right-handed pitcher was a career journeyman, playing in Baltimore in 1987 and later from 1990 until 1992.

He then played with the Cleveland Indians from 1992 until 1998, the San Francisco Giants in 1998, the Seattle Mariners in 1999 and 2000, the Philadelphia Phillies from 2004 until 2005, the Pittsburgh Pirates from 2001 until 2003, the Colorado Rockies in 2006, the Detroit Tigers in 2007, and the Phillies a second time later in 2007. Mesa is a two-time MLB All-Star (1995, 1996), and earned American League Rolaids Relief Man of the Year honors in 1995, the same year he led the American League in saves. Mesa pitched in more than one thousand career games, amassing an 80-109 win-loss record. He finished his career with an earned run average of 4.36 to go along with 1,038 strikeouts and more than 300 saves. Mesa made headlines for his dispute with his ex-teammate, Omar Vizquel, after Vizquel spoke poorly of Mesa's performance during Game 7 of the World Series in 1997. Mesa retaliated by threatening to hit Vizquel with a pitch every opportunity he gets. Mesa was also arrested on rape and gross sexual imposition charges in Ohio in 1996; about six months later, he was acquitted. 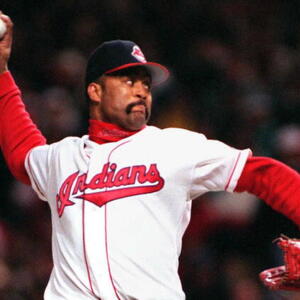