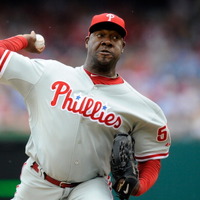 Jose Contreras net worth and salary: Jose Contreras is a Cuban-born retired professional baseball pitcher who has a net worth of $22 million dollars. Jose Contreras was born in Pinar del Rio, Cuba in 1971. Jose Contreras played for the Cuban National Team and the Pinar del Rio Vegueros in Cuba's Cuban National Series. In 1999, Jose Contreras, as a member o the Cuban national baseball team played an exhibition game against the MLB's Baltimore Orioles in Havana. In that game, Contreras pitched eight shutout innings and struck out 10 players, as well as catching the attention of Major League scouts. Jose Contreras defected from Cuba in October 2002 while playing in Mexico for the Cuban national team. The New York Yankees signed the stand out Cuban pitcher to a four-year deal in December 2002. Jose Contreras has played for five MLB teams since his defection: the New York Yankees from 2003-2004, the Chicago White Sox from 2004-2009, the Colorado Rockies in 2009, and the Philadelphia Phillies from 2010-2012. Jose Contreras was a member of the 2005 World Series champion Chicago White Sox team and a 2006 All-Star team selection. During his career, he earned a little more than $67 million in salary alone.