Jose Bautista Net Worth: Jose Bautista is a Dominican professional baseball player who has a net worth of $35 million. Jose Bautista was born in Santo Domingo, Dominican Republic in October 1980. He is a right fielder who bats and throws right handed. He played at De La Salle High School and Chipola College before being drafted in the 20th round of the 2000 Major League Baseball Draft by the Pittsburgh Pirates.

He played in the minor leagues and then was taken in the Rule 5 Draft by the Baltimore Orioles. Bautista made his major league debut for the Orioles in April 2004. He was claimed by the Tampa Bay Devil Rays and then purchased by the Kansas City Royals before being traded to the New York Mets and then the Pittsburgh Pirates. Bautista is the only player who was on five different MLB rosters in one season. He settled in Pittsburgh until 2008 before he was traded to his current team the Toronto Blue Jays. In 2001 Jose signed a five year contract extension worth $64 million. Bautista has been a five time All-Star from 2010 to 2014. He was the MLB home run champion in 2010 and 2011 and also won the Hank Aaron Award and Silver Slugger Awards in the same years. 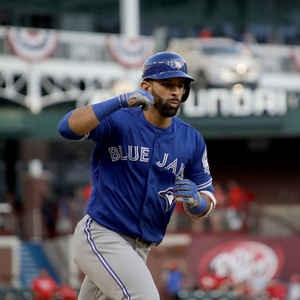