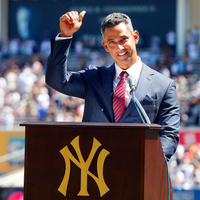 Jorge Posada Net Worth and salary: Jorge Posada is a Puerto Rican former professional baseball player who has a net worth of $60 million. Jorge Rafael Posada Villeta was born in San Juan, Puerto Rico, in 1971, and played baseball at Calhoun Community College in Alabama. He was a co-captain and all-conference player in 1991. A year earlier, the New York Yankees drafted Posada in the 24th round of the MLB Draft. He worked his way through the Yankees' farm system before making his Major League debut in September 1995. Posada played just one regular season game that year but ended up playing in the postseason as a pinch runner. He played limited time in 1996 before playing in more than 50 games during the 1997 season. He played 111 games during the World Series-winning 1998 season before re-signing with the Yankees in 1999. Posada went on to be named to five All-Star teams and has won four World Series championships and five Silver Slugger Awards. The catcher finished third in AL MVP voting in 2003. Posada retired in 2011 following a season as a designated hitter. Between 2000 to 2011, he had the most RBIs and homeruns of all MLB catchers. Posada has been married to his wife, Laura Mendez, since 2000. They have two children together, including a son who suffers from craniosynostosis. Posada's organization, the Jorge Posada Foundation, supports research efforts to combat the condition. Posada is the author of several books, including "Play Ball!" and "Fit Home Team".