How much is Jordan Zimmermann Worth?

Jordan Zimmermann net worth and salary: Jordan Zimmermann is an American professional baseball player who has a net worth of $14 million. He is a starting pitcher who played for the Washington Nationals from 2009 to 2015 and for the Detroit Tigers since 2016. He was born in 1986 in Auburndale, Wisconsin and was raised there throughout his childhood. Upon graduating from Auburndale High School, he attended the University of Wisconsin at Stevens Point and was drafted by the Washington Nationals in the second round of the 2007 amateur draft. He debuted with the team on April 20, 2009 and exceeded rookie limits during the 2009 season. His first contract was a 2-year/$24 million dollar deal that expired in 2016. Zimmerman signed a new five year deal for $110 million with the Tigers in 2015. Although plagued with a few injuries early in his career, Zimmermann has pitched several immaculate innings while working with the Nationals. In 2013, he had his first career shutout with a one-hitter against the Cincinnati Reds, which was the second straight one-hitter by Nationals pitching in the series, marking the first occasion since 1917 when a Washington team achieved that streak, and the first time since 1900 that the Reds were on the receiving end of a shutout. During that same year, Zimmermann was named to his first All-Star game but chose not to play due to stiffness in his neck. He finished the season with a career high in wins. Zimmermann is mainly a three-pitch pitcher; he throws a four-seam fastball, a slider, and a curveball although on rare occasions he throws a circle change to left-handed hitters. On September 28, 2014, Zimmermann pitched a no hitter, which was the first in the history of the Nationals. 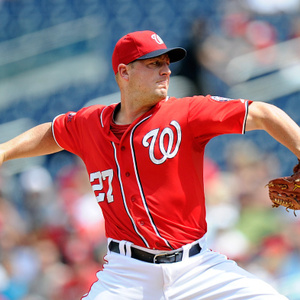