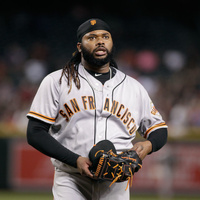 Johnny Cueto Net Worth and salary: Johnny Cueto is a Dominican professional baseball player who has a net worth of $50 million. Johnny Cueto was born in San Pedro de Macoris, Dominican Republic in February 1986. Cueto is a pitcher who bats and throws right handed. He played in the minor leagues for three seasons. Johnny played for the Gulf Coast Reds and Sarasota Reds. He was the Reds' Minor League Pitcher of the Year for two seasons. Cueto made his major league debut for the Reds in April 2008 and has played for the Reds his entire career. He became one of the National League's top pitchers by 2011 and won 19 games in 2012 to help the Reds win the NL Central title. Cueto was a MLB All-Star in 2014 and was named NL Player of the Week in August 2014. He has also represented the Dominican Republic for the 2009 World Baseball Classic. As of September 2014 Cueto has more than 80 wins and nearly 1000 strikeouts in his MLB career.