Johnny Bench Net Worth: Johnny Bench is an American retired professional baseball player who has a net worth of $5 million. Johnny Bench was born in Oklahoma City, Oklahoma in December 1947. He played baseball and basketball at Binger High School and was the class valedictorian. As a catcher Bench was drafted #36 by the Cincinnati Reds in the 1965 amateur draft.

He played for the Buffalo Bisons in the minor leagues in 1966 and 1967. In August 1967 he was called up to the majors. Bench played his entire career for Cincinnati. In 1968 he was the National League Rookie of the Year. He received the Gold Glove Award 10 years in a row from 1968 to 1977. He was an All-Star 14 times, from 1968 to 1980 and then again in 1983. As a member of the Big Red Machine he won six division titles, four National League pennants, and two World Series championships (1975 and 1976). Bench was the National League MVP in 1970 and 1972 and the World Series MVP in 1976. He has been named to the Major League Baseball All-Century Team and All-Time Team. He has been called the greatest catcher in baseball history by ESPN. His #5 jersey was retired by the Cincinnati Reds and Bench was inducted into the National Baseball Hall of Fame in 1989. He retired from the game in 1983 and serves on the Board of Directors for the Cincinnati Reds Hall of Fame. Bench was the first individual baseball player to appear on a Wheaties box. 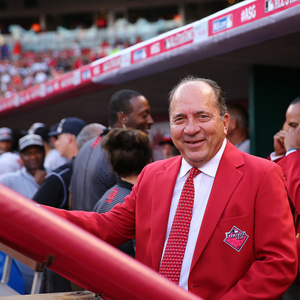