John Smoltz Net Worth: John Smoltz is an American former Major League Baseball pitcher and active sportscaster who has a net worth of $60 million. John Smoltz was born May 15, 1967 in Warren, Michigan. He is best known for his prolific career of more than two decades with the Atlanta Braves, in which he racked up eight All-Star selections and received the Cy Young Award in 1996. Though mostly known as a starting pitcher, Smoltz was converted to a reliever in 2001 during his recovery from Tommy John surgery (a surgery common to athletes in which the ulnar collateral ligament in the medial elbow is replaced with a tendon from elsewhere in the body). Smoltz then spent four years as the team's closer before returning to a starting role. In 2002, he became only the second pitcher in history to have had both a 20-win season and a 50-save season (the other being Hall of Famer Dennis Eckersley). He is the only pitcher in major league history to top both 200 wins and 150 saves. He became the 16th member of the 3,000 strikeout club on April 22, 2008 when he fanned Felipe Lopez of the Washington Nationals in the third inning in Atlanta. Smoltz threw a four-seam fastball that was clocked at 98 mph and an 88–91 mph split-finger fastball that he used as a strikeout pitch. He also mixed in a curveball and change-up on occasion. In 1999, he experimented with both a knuckleball and a screwball, though he rarely used either in game situations. He is also an avid golfer who has played with the likes of Tiger Woods and Annika Sorenstam. In 2010, Smoltz joined TBS and MLB Networks as a baseball analyst. He has also joined FOX Sports South and SportSouth to be an analyst for select Atlanta Braves games during the 2014 season. 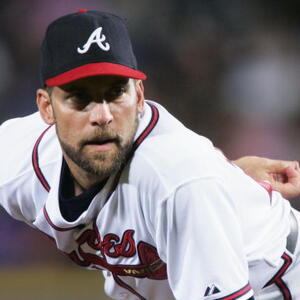