John Lackey net worth and salary: John Lackey is an American professional baseball pitcher who has a net worth of $60 million. John Lackey has earned his net worth as a pitcher in Major League baseball notably as a member of the Boston Red Sox, Chicago Cubs and Anaheim Angels. He was first drafted into MLB by the Anaheim Angels in the second round (68th overall) of the 1999 Major League Baseball Draft. Lackey was born in Abilene, Texas on October 23, 1978, as a child he played in the Dixie Little League in Abilene. He was a letterman who played football, basketball, and baseball at Abilene High School, where he was a two-time first team All-District honoree and during his senior year, he was also an All-State selection. His first appearance as pitcher with the Los Angeles Angels resulted in a loss on June 24, against the Texas Rangers, however, later that same year in Game 7 of the World Series on October 27, 2002, that Lackey won one of the biggest games of his career. Lackey allowed only one earned run on four hits while striking out four in five innings, to seal the their World Series title. Lackey became only the second rookie in World Series history to start and win Game 7. In 2007 Lackey emerged as the team's ace, after Bartolo colon was place on the disabled list, Colon was a 2005 CY Young winner. On June 13, 2007 Lackey became the first pitcher to win 10 games for the 2007 season. Lackey officially signed a 5 year contract worth $82.5 million on December 16, 2009, with the Boston Red Sox. An article about Lackey was published by the satirical publication The Onion, in 2009; it was titled Superstitious John Lackey Has To Build, Destroy A Luxury Hotel Before Every Start. He was also featured in a music video for Kevin Fowler with teammates Josh Beckett, Tim Wakefield and Clay Buchholz. 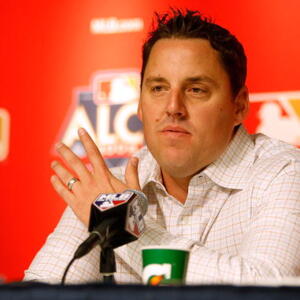