John Danks Net Worth: John Danks is an American professional baseball player who has a net worth of $34 million. John Danks was born in Austin, Texas, in 1985. The starting pitcher was drafted in the first round of the 2003 MLB Draft by the hometown Texas Rangers, but he made his professional debut four years later on April 8, 2007 with the Chicago White Sox.

He has played ever game of his career to date with the White Sox organization (as of the fall of 2014). One of his best career seasons came during the 2008 season, where he set career-best records in most statistical categories. He landed a five-year, $65 million contract with the White Sox at the end of 2011. Through the end of the 2014 season, Danks has amassed a 72-85 career win-loss record to go along with a 4.28 earned run average and 962 strikeouts. Danks' best pitches include his 90-mile per hour four-seam fastball, his sharp cutter in the high '80s, and his straight change in the low to mid '80s. His brother, Jordan, also plays center field for the White Sox, and has since the 2012 season. Danks proposed to his girlfriend, Ashley Monroe, following her performance on stage with the Pistol Annies in September of 2012. 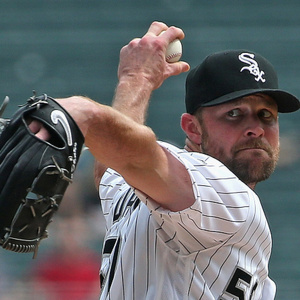