How much is Joey Votto Worth?

Joey Votto Net Worth: Joey Votto is a Canadian professional baseball player who has a net worth of $110 million. Joey Votto was born in Toronto, Canada in September 1983. Joey played at Richview Collegiate Institute where he also played hockey and basketball. As a first baseman Votto was drafted out of high school by the Cincinnati Reds in the second round of the 2002 MLB amateur draft. He spent two years with rookie affiliates and played for the Class A Dayton Dragons in 2004. He played for Potomac, Sarasota, and Chattanooga. Votto played in the 2006 Futures Game on the World Team. He was called up to the Cincinnati Reds in 2007. Votto was selected as an All-Star four straight seasons from 2010 to 2013. During the same time span he was four time Tip O'Neill Award winner and was the National League On-Base Percentage leader. Votto was named National League MVP in 2010 and also won the NL Hank Aaron Award. The same year he received the Lou Marsh Trophy for being Canada's athlete of the year. In 2011 Votto received a Gold Glove Award. Joey has played for the Reds for his entire career and represented Team Canada at the 2013 World Baseball Classic. 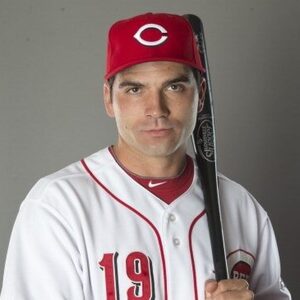