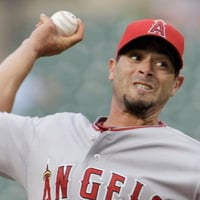 Joel Pineiro Net Worth: Joel Pineiro is a Puerto Rican professional baseball player who has a net worth of $22 million. Joel Pineiro was born in Rio Piedras, Puerto Rico in September 1978. He is a starting pitcher who bats and throws right handed. Pineiro made his Major League Baseball debut for the Seattle Mariners in 2000 and played there through 2006. He played for the Boston Red Sox in 2007 and then the St. Louis Cardinals from 2007 to 2009. In 2010 he signed a two year deal worth $16 million with the Los Angeles Angels of Anaheim. Since 2012 Pineiro has played in the minor leagues for the Philadelphia Phillies, Baltimore Orioles, Chicago Cubs, and Los Angeles Angels of Anaheim. Through the 2014 season he has a record of 104 – 93 with 1,058 strikeouts and an ERA of 4.41. Joel has three children including twins with his wife Shirley and resides in Rio Piedras.