Joe DiMaggio net worth: Joe DiMaggio was an American professional baseball player who had a net worth of $50 million. Joe DiMaggio was born in Martinez, California in November 1914 and passed away in March 1999. He was a center fielder who batted and threw right handed. DiMaggio made his Major League Baseball debut for the New York Yankees in 1936 and played for the Yankees his entire career which lasted from 1936 to 1942 and then from 1946 to 1951.

Over the course of his career, DiMaggio won nine World Series championships with the Yankees and was a 13 time MLB All-Star. He was a three time American League MVP, two time AL batting champion, two time AL home run leader, and two time AL RBI leader. DiMaggio set a MLB record for his 56 game hitting streak. He was named to the Major League Baseball All-Century Team and had his #5 retired by the New York Yankees. DiMaggio was inducted into the National Baseball Hall of Fame in 1955. The gap in his MLB career came due to his service in the United States Army Air Forces. DiMaggio was married to Marilyn Monroe and was a spokesman for Mr. Coffee. Joe DiMaggio passed away on March 8, 1999 at 84 years old. At the time of his death, his estate was worth as little as $40 million and as much as $80 million. 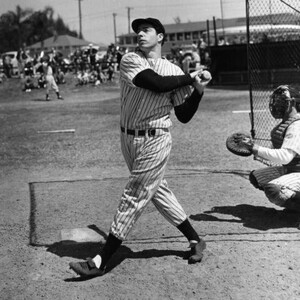