Joe Blanton Net Worth: Joe Blanton is an American retired professional baseball player who has a net worth of $18 million. Joe Blanton was born in Nashville, Tennessee in December 1980. He was a starting pitcher who batted and threw right handed. He pitched at the University of Kentucky and was drafted #24 by the Oakland Athletics in the 2002 Major League Baseball Draft.

After playing in the minor leagues Joe Blanton made his MLB debut for the A's in 2004. He played with Oakland until 2008 when he joined the Philadelphia Phillies. Joe signed a three year extension with the Phillies in 2010 for $24 million. He was traded to the Dodgers in 2012 and then signed a two year deal worth $15 million with the Los Angeles Angels of Anaheim where he played until 2014. Blanton retired from baseball in April 2014. He won a World Series Championship with the Phillies in 2008 where he hit a home run and was the winning pitcher in Game 4. Blanton posted a career record of 85 – 89 with 1,086 strikeouts and an ERA of 4.51. 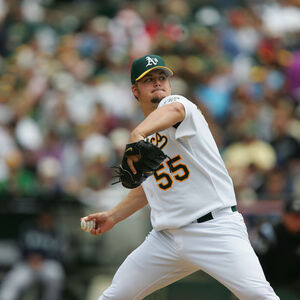