What is Jimmy Rollins' Net Worth and Salary?

James "J-Roll" Calvin Rollins was born on November 27, 1978, and grew up in an athletic family in Alameda, California. He credits his mother who played competitive fastpitch softball for helping him develop his cerebral approach to baseball. His brother, Antwon, played in the minor league system of the Texas Rangers, and his sister, Shay, started on the University of San Francisco's women's basketball team. His cousin is former MLB player Tony Tarasco. Jimmy also pursued music thanks to his father's encouragement and played trumpet in music videos and clubs when he was in his teens.

Jimmy Rollins attended Encinal High School where his parents refused to let him play football, so he focused entirely on baseball. He set 10 school records and was named a member of USA Today's All-USA High School Baseball Team. Baseball America named him the top infielder in Northern California and a second-team All-American. He was also named a second-team All-American by The American Baseball Coaches Association and Rawlings. Rollins committed to play baseball at Arizona State University, but praise from a Phillies' Bay Area scout persuaded the team to draft him.

Jimmy Rollins was selected by the Philadelphia Phillies in the second round of the 1996 MLB Draft. He spent most of five seasons in the minor leagues before making his Major League debut in September of 2000. His successes as a hitter and fielder carried over to the Phillies big league team, and he was named their leadoff hitter. He held down that role for nearly 10 years and made three All-Star appearances (2001, 2002, 2005) over his career. In 2001, he was the NL stolen base leader. He received a Silver Slugger Award in 2007 along with being named the NL MVP. Rollins has won four Gold Glove Awards (2007-2009, 2012) and was the recipient of the Roberto Clemente Award in 2014.

Rollins was traded to the Dodgers in 2014 after waiving his no-trade clause. He struggled offensively with the team and lost his starting job to rookie Corey Seager. In 2016, Jimmy signed a minor league contract with the Chicago White Sox with an invitation to spring training. He was announced as their opening day shortstop, but his offensive struggles continued and he was designated for assignment. Rollins signed a minor league contract with the San Francisco Giants in December of 2016 but was released in the spring.

Over his MLB career, Jimmy Rollins compiled a batting average of .264 with 2,455 hits, 231 home runs, 936 RBIs, and 470 stolen bases along with a fielding percentage second only to Omar Vizquel among shortstops who have played the position for at least 10 seasons. 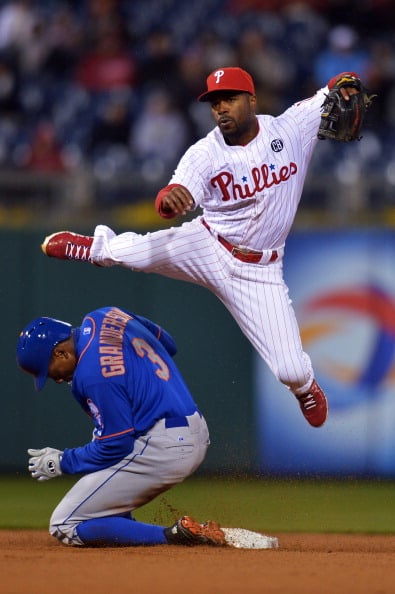 In June of 2006, Jimmy Rollins signed a five-year, $40 million contract with the Philadelphia Phillies. In 2011, he signed an extension with the team for three years and $33 million.

Rollins earned just under $100 million in salary alone during his 17 seasons in the majors.

Jimmy Rollins and his wife, Johari Smith, have two daughters together and live in the Tampa, Florida, area. The couple has taken part in several charitable endeavors over the years including an annual BaseBOWL charity bowling tournament for the Arthritis Foundation and the creation of The Johari & Jimmy Rollins Center for Animal Rehabilitation. Rollins is also an investor for NRG Esports.

In January of 2019, Jimmy purchased a home in Encino, California, for $8.7 million. One year earlier, he spent $10.65 million for a different home in the same area. That sale set a record for Los Angeles' San Fernando Valley community.