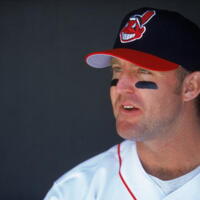 Jim Thome net worth and salary: Jim Thome is a professional baseball player for the Baltimore Orioles of the MLB and has a net worth of $80 million and an annual salary of $1.25 million. Jim Thome has earned his net worth through his many years in professional baseball. Thome began his career as a third baseman (later to become first baseman) for the Cleveland Indians in 1991. He was drafted by Cleveland in 1989 MLB draft and began playing for the minor leagues. During his time with the Cleveland Indians he was named the most popular athlete in the history of Cleveland sports. He was given the nicknames of the "Thomenator," "The Pride of Peroia" and "Mr. Incredible" during his time with the White Sox. He is known for his homerun hits, especially having the longest hit in the history of Cleveland baseball. In 2003 Thome began playing for the Philadelphia Phillies after signing a six year contract at $85 million, but was traded to the Chicago White Sox in 2005. He became their designated hitter. In 2009 Thome was traded to the L.A. Dodgers, but the only position he was given is that of pinch hitter. In 2010 he began playing for the Minnesota Twins and on August 15th he hit his two career home runs which brought the total up to 600. In 2011 he was traded back to the Cleveland Indians and later that year he signed to play for the Philadelphia Phillies once again and in 2012 was traded back to the Baltimore Orioles. He is in seventh place on the all-time list for hitters with 610 career home runs. Jim Thome was born in Peoria, Illinois in 1970 and attended Limestone Community High School in Bartonville, Illinois. He was also a student at Illinois Central College. He and his wife, Andrea still reside in Peoria, Illinois with their two children, daughter Lila Grace, and son Landon.