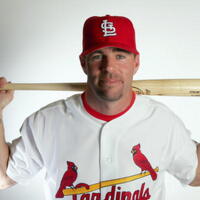 Jim Edmonds Net Worth: Jim Edmonds is an American retired professional baseball player who has a net worth of $35 million. Jim Edmonds was born in Fullerton, California in June 1970. He was a center fielder who batted and threw left handed throughout his career. He attended Diamond Bar High School and was drafted in the 7th round by the California Angels in the 1988 Major League Baseball Draft. He played in the minor leagues before making his major league debut for the Angels in September 1993. He played for the Angels until 1999 and then played for the St. Louis Cardinals from 2000 until 2007. In 2008, he played for the San Diego Padres and Chicago Cubs. In 2010, Edmonds went on to play for the Milwaukee Brewers and Cincinnati Reds. During his career, Edmonds was a four-time MLB All-Star selection. He won a World Series Championship in 2006 with the Cardinals. Edmonds was an eight time Gold Glove Award recipient and won a Silver Slugger Award in 2004. He was inducted into the St. Louis Cardinals Hall of Fame in August 2014. In 2013, Jim became an analyst for the Cardinals broadcasting crew. He opened Jim Edmonds 15 Steakhouse in 2007 and was a 50% owner, but sadly the steakhouse closed its doors in 2013. Edmonds has two daughters (Lauren and Hayley) with his first wife, Lee Ann Horton. Edmonds and second wife, Allison Jayne Raski, were married on July 16, 2008 and divorced in January 2014. He has two children a son (Landon James) and a daughter (Sutton Jayne) with Allison. In October of 2014, Edmonds married Meghan O'Toole King (his third marriage) in St. Louis and the couple appeared recently on the hit Bravo reality series, The Real Housewives of Orange County.