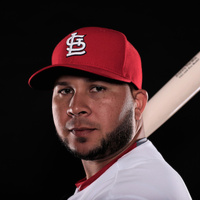 Jhonny Peralta Net Worth: Jhonny Peralta is a Dominican professional baseball player who has a net worth of $12 million. Born in Santiago, Dominican Republic in 1982, Jhonny Peralta made his Major League Baseball debut with the Cleveland Indians on June 12, 2003. He played with the Indians for seven years, from 2003 until 2010. Peralta then played with the Detroit Tigers from 2010 until 2013 and the St. Louis Cardinals in 2014. As of the end of the 2014 season, Peralta remains on the Cardinals roster after he signed a four-year, $53 million deal with the team toward the end of 2013. The right-handed shortstop and third baseman is a two-time MLB All-Star, earning the honors in 2011 and again in 2013. The "Sporting News" named him the National League All-Star at the shortstop position in 2014. Through the 2014 season, he has a career batting average of .267 to go along with 1,516 hits, 177 home runs, and close to 800 runs batted in. While he was a member of the Tigers, Peralta was forced to serve a 50-game MLB suspension for his ties to the Biogenesis scandal involving performance-enhancing drugs. Peralta and his wife, Molly, have three daughters together, including a set of twin girls.