Jermaine Dye net worth and salary: Jermaine Dye is a retired American Major League Baseball player that has a net worth of $30 million. Jermaine Dye had a 14-year career and was an All-Star in both 2000 and 2006. Jermaine Dye won the World Series MVP title with the White Sox in 2005. He was a right-hander who in his prime was known for his ability to hit for power and his incredibly powerful throwing arm. Jermaine Trevell Dye was bon on January 28, 1974 in Oakland, California. He attended Will C Wood High School in Vacaville, California and Cosumnes River College in Sacramento. In 1993, he was selected by the Atlanta Braves in the 17th round of the amateur draft and made his Major League debut in 1996 where he hit a home run in his first Major League at-bat.

In the 1997 offseason, he was traded to the Royals in a package that brought Michael Tucker and Keith Lockhart to Atlanta. In 1999, Dye played in 158 games for the Royals, and hit 26 homeruns. He was a celebrated Royals player at the time, with fans frequently chanting "Dye-no-mite" after he came up to bat. The next year he made the American League All-Star team. After leaving the Royals, Jermaine played for the Oakland Athletics until 2004. In 2001, during a game against the New York Yankees, Jermaine stepped up to the plate to face off against Orlando Hernandez. This particular at-bat quickly ended his season when a foul pitch hit his shin and fractured his tibia. This incident is recognized as one of the top 40 worst injuries in baseball.

Before the start of the 2005 season he was signed by the Chicago White Sox for a two-year, $10.15 million free agent contract with an option to renew in 2007. He played 145 games in 2005, which was the most he played since his injury in 2001. While with the White Sox, he was named World Series MVP batting and hit the game changing RBI that sent in the deciding run for Chicago's 1-0 Game 4 victory against the Houston Astros, which clinched the series sweep. His best offensive season was in 2006 where he finished second in the league with 44 homeruns, third in slugging, fifth in runs batted in, and he placed fifth in the American League Most Valuable Player voting. He was selected to the American League All-Star Team during 2006, and in October of that year, the White Sox exercised their $6.75 million option for Dye's 2007 season. Jermaine Dye, along with other Chicago hitters, struggled in the first half of 2007, but he turned his game around in the second half. Due to his improvement throughout the season he signed a two-year contract extension in August of that year with the White Sox. In 2009, Dye became a free agent and on March 31, 2011 announced his retirement after fourteen years in the game. 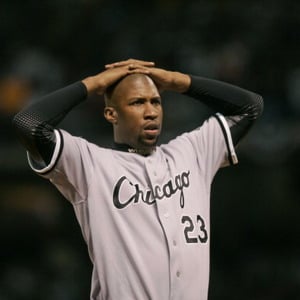