Jeremy Guthrie net worth: Jeremy Guthrie is an American professional baseball player who has a net worth of $14 million. Jeremy Guthrie was born in Roseburg, Oregon in April 1979. Guthrie is a pitcher who bats and throws right handed. He played baseball, football, and basketball at Ashland High School and was class valedictorian.

He attended Brigham Young University but transferred to Stanford University where he was a starting pitcher. Guthrie was drafted #22 by the Cleveland Indians in the 2002 Major League Baseball Draft. He signed a four year deal worth $4 million with a $3 million signing bonus. He played in the minors before making his MLB debut with the Indians in 2004 where he played until 2006. In 2007 he was claimed by the Baltimore Orioles where he played until 2011. In 2012 Guthrie was traded to the Colorado Rockies. The same year he was traded again to the Kansas City Royals. He signed a three year deal worth $25 million where he would earn $5 million in 2013, $11 million in 2014, and $9 million in 2015. During his major league career through the 2014 season Guthrie has a record of 83 – 100. He has 962 strikeouts and an ERA of 4.23. 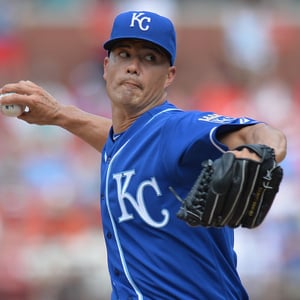