Jayson Werth Net Worth and salary: Jayson Werth is an American Major League Baseball player who has a net worth of $75 million. Born Jayson Richard Gowan Werth on May 20, 1979, in Springfield, Illinois, he currently plays as an outfielder for the Washington Nationals. Nicknamed Werewolf, he also played for other MLB's teams, i.e., Toronto Blue Jays, Los Angeles Dodgers and Philadelphia Phillies. Coming from an athletic family, Werth excelled in other sports while in high school. Thus, he initially planned to play college basketball at the University of Georgia but had a change of heart as he was selected 22nd overall by the Baltimore Orioles in the 1997 MLB Draft. However, he got traded to the Blue Jays replacing pitcher John Bale and his major league debut was delayed. 2002 saw his breakthrough into the major leagues with the Blue Jays. Having spent two seasons with the team, he got traded to the LA Dodgers for Jason Frasor in March of 2004. Next, followed a one-year contract with the Phillies, who having Werth in the team won their second World Series title in 2008. It was in July of 2009 when he was named to the All-Star team as a replacement for New York Met's outfielder Carlos Beltran. Only one year later, he inked the 14th richest contract in baseball history. It was the seven-year contract that he signed with the Nationals on December 5, 2010, a contract worth $126 million. Batting and throwing right-handed, Jayson Werth has posted a .309 batting average and .388 on-base percentage.

Jayson Werth Salary
In December 2010 Jayson Werth signed a contract with the Nationals that will pay him a salary of $126 million over 7 years. 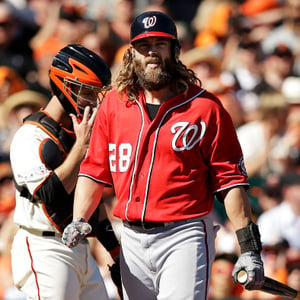