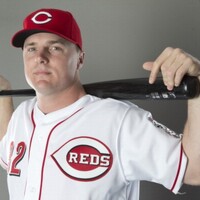 Jay Bruce Net Worth: Jay Bruce is an American professional baseball player who has a net worth of $27 million. Jay Bruce was born in Beaumont, Texas, in 1987, and played baseball at West Brook High School in his hometown. Bruce was drafted 12th overall during the first round of the 2005 Major League Baseball Draft by the Cincinnati Reds. He made his way through the Reds' farm system, earning numerous awards, including the 2007 Baseball America Minor League Player of the Year honor, before making his pro debut for the club on May 27, 2008, shortly after his 21st birthday. Bruce, a left-handed outfielder, has played every game of his career with the Reds as of the fall of 2014. Through the end of the 2014 season, Bruce has amassed a .251 career batting average. He has 887 career hits, 182 home runs, 551 runs batted in, and a slugging percentage of .467 through 966 total games. He is a two-time back-to-back MLB All-Star, earning the honor in 2011 and again in 2012. He's also a two-time Silver Slugger Award winner, receiving the accolades in 2012 and in 2013. Bruce is a player in "Backyard Baseball 10", "MLB 2K7", "MLB 2K8", "MLB2K11", "MLB2K12", and "MLB2K13".