Javy Lopez Net Worth: Javy Lopez is a former Puerto Rican professional baseball player who has a net worth of $26 million. Born in Ponce, Puerto Rico, in 1970, Javy Lopez, landed an amateur free agent contract with the Atlanta Braves in 1987. Five years later, he made his pro debut in MLB on September 18, 1992 with the team.

He went on to play with the Braves for more than a decade until joining the Baltimore Orioles from 2004 until 2006 and later the Boston Red Sox in 2006. He last played for the Red Sox on September 2, 2006, 14 years after his debut. He had initially signed a contract with the Colorado Rockies before the 2007 season, though he never played with the team. He was invited to re-join the Braves in 2008, but declined. Lopez is a right-handed catcher who won the Silver Slugger Award in 2003, the same season he won the National League Comeback Player of the Year honor. He was the NLCS MVP in 1996 and was part of the Braves' World Series championship team in 1995. Lopez is a three-time MLB All-Star (1997, 1998, 2003). He finished his pro playing career with a .287 batting average, 260 home runs, and 864 runs batted in. Lopez has two children with his first wife, model Analy Hernandez. He has a son with his second spouse, Gina Brodbeck. 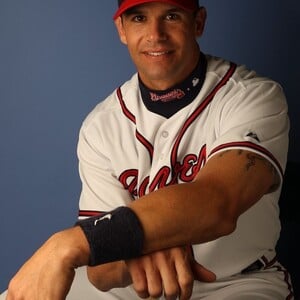