Javier Vázquez net worth: Javier Vázquez is a former Major League Baseball starting pitcher who has a net worth of $40 million. During his career he pitched for the Florida Marlins, Atlanta Braves, Chicago White Sox, Arizona Diamondbacks, New York Yankees and Montreal Expos. Born on July 25, 1976 in Ponce, Puerto Rico, he stands 6 feet 2 inches tall and weighs 210 pounds. The right-hander was drafted by the Montreal Expos in the fifth round of the 1994 amateur draft and made his Major League debut on April 3, 1998. In 1999, as part of a young Expos rotation of twenty-something, tall, power-pitchers, Vázquez started the season as the team's number three pitcher.

In 2000, Javier Vázquez was the opening day starter for the Expos and was thought of as a promising young pitcher. By 2001, he had become the ace of the Expos pitching staff and was thought of as an All-Star for years to come. In 2002, he pitched a then career-high 230 innings. Even though his career was prospering, he was having trouble negotiating an agreeable salary with the Expos, so in 2003 he was acquired by the New York Yankees and he agreed to a four-year deal through the 2007 season.

Following a four walk, two strikeout performance and game seven loss to the Boston Red Sox in the 2004 American League Championship Series, the Yankees sent Vázquez, Brad Halsey, and Dioner Navarro, to the Arizona Diamondbacks in exchange for Randy Johnson in 2005. After pitching the 2005 season with Arizona, Vázquez formally requested a trade from the team, asking for a location that was "easier for his family in Puerto Rico to visit. On December 20, 2005, Vázquez was traded to the Chicago White Sox for Orlando Hernández, Luis Vizcaíno, and Chris Young.

During the 2007 season he struck out 213 and walked 50 in 216 innings pitched. Vázquez agreed to play for the Puerto Rico Team in the 2006 World Baseball Classic, joining fellow Puerto Rican players representing the island in a team managed by St. Louis Cardinals third base coach Jose Oquendo. In 2008, Vázquez was traded to the Atlanta Braves. In 2009, Vázquez had what was perhaps his most successful season with 238 strikeouts and 44 walks in 219 innings. Due to this successful season, the New York Yankees re-acquired Vázquez, banking on his reputation as one of the top starters in baseball. In 2010, he became the third active pitcher to beat all 30 MLB teams along with Barry Zito and Jamie Moyer. Unfortunately, he struggled during the regular season and the Yankees temporarily demoted him to the bullpen.

Following the 2010 season he reached an agreement on a one-year, $7 million contract with the Florida Marlins. He finished out the 2011 series that resulted in a knee injury that required right meniscus surgery. He took off the 2012 season due to the knee injury, and is rumored to be considering retirement. Vázquez is married to Kamille Vázquez. They have three children: Kamila, Javier Josué, and Kariana. Vázquez claims that he dislikes being the center of attention outside of the playing field and describes himself as a 'house man' spending his free time with his children. 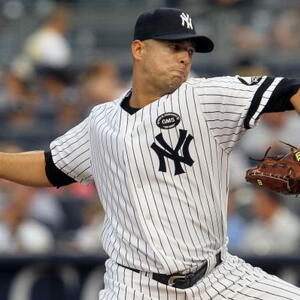