Jason Varitek net worth and salary: Jason Varitek is a former American professional baseball player who has a net worth of $30 million. Born on April 11, 1972 in Rochester, Michigan, Varitek is best know for his position as catcher in Major League Baseball. He was a switch hitter and threw right-handed and made his MLB debut with the Boston Red Sox on September 24, 1997.

Also known as "Tek," Varitek was a rare player in the he remained with one team for the duration of his career. He maintained a batting average of .256, a total of 193 home runs, and 757 runs batted in. He is a three-time All-star, a two-time World Series champion, and received the Gold Glove Award in 2005, the Silver Slugger Award in 2005, and both the Golden Spikes Award and Dick Howser Trophy early in his career in 1994. He began playing Little League Baseball in 1984 and proceeded to play for the Georgia Tech Yellow Jackets in college. He is currently known as Special Assistant to the General Manager to the Boston Red Sox after having retired from the league on March 1, 2012. He made his last MLB appearance with the Red Sox on September 25, 2011. He is currently married to second wife Catherine Panagiotopoulos and has three children by the names of Kendall, Alexandra, and Caroline. 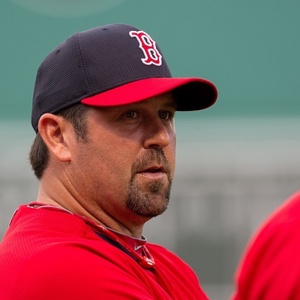