Jarrod Washburn is a former American professional baseball player who has a net worth of $20 million. Born on August 13, 1974 in La Crosse, Wisconsin, Washburn made his debut in Major League Baseball as pitcher for the Anaheim Angels on June 2, 1998. Washburn attended Webster High School, followed by the University of Wisconsin- Oshkosh, where he won the NCAA Division III World Series Championship in 1994 and was inducted into the college sports Titan Hall of Fame in 2010.

After college, Washburn was drafted to the Anaheim Angels and went on to play for the Seattle Mariners from 2006 to 2009 and the Detroit Tigers in 2009. He has a win-loss record of 107-109, and earned run average of 4.10, and a total of 1,103 strikeouts. In 2002, Washburn became a World Series champion with the Angels. After his reign with the Tigers, Washburn applied to become a free agent in order to devote more time to his family. He made his last MLB appearance on September 15, 2009 with the Detroit Tigers. Washburn weighs in at 195 pounds and throws and bats left-handed. He received fourth place in the American League Cy Young Award voting in 2002 and played a key role in getting the Angels to the World Series after winning eighteen games and only losing six that season. 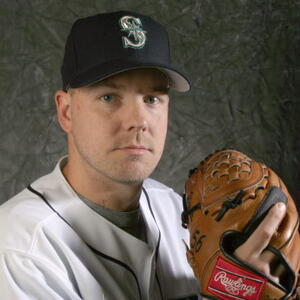