James Shields net worth: James Shields is an American professional baseball player who has a net worth of $45 million. James Shields was born in Newhall, California in December 1981. Shields is a starting pitcher who bats and throws right handed. He was named the Los Angeles Times' Valley Player of the Year while playing for William S. Hart High School in 1999. He went 11-0 in his junior season and was named the Southern Section's Division II Player of the Year. Shields earned a full scholarship to Louisiana State University and was ranked as Baseball America's 16th best high school prospect in 2000. He was drafted in the 16th round of the 2000 MLB Draft by the Tampa Bay Devil Rays. Shields played in the minor leagues and made his MLB debut for the Devil Rays in 2006 where he played until 2012. After the 2008 season he was signed to a four year deal worth $11.25 million. He was traded to the Kansas City Royals in 2012 and in 2013 they exercised a $13.5 million option for the 2014 season. Shields was named an MLB All-Star in 2011. Through the 2014 season he has 114 wins and 90 losses and 1,626 strikeouts. James is the first cousin of former Chicago White Sox outfielder Aaron Rowand. 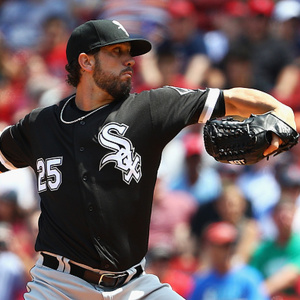