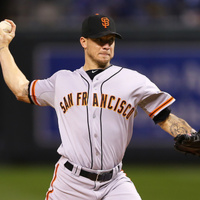 Jake Peavy Net worth: Jake Peavy is an American professional baseball player who has a net worth of $20 million. During his career, Jake Peavy earned $127 million in salary before taxes and fees. His biggest salary year was 2016 when he earned $16 million from the Chicago White Sox. Jake Peavy was born in Mobile, Alabama in May 1981. He is a pitcher who throws and bats right handed. Peavy attended St. Paul's Episcopal School and was drafted in the 15th round of the 1999 Major League Baseball Draft by the San Diego padres. He pitched for the Arizona League Padres, Idaho Falls Braves, Fort Wayne Wizards, Lake Elsinore Storm, and Mobile BayBears. He made his MLB debut in June 2002. Peavy played for the Padres until 2009 when he was traded to the Chicago White Sox. In 2013 he was traded to the Boston Red Sox who traded him to the San Francisco Giants in 2014. Peavy won a World Series Championship with the Red Sox in 2013 and another one with the Giants in 2014. In 2007 he was named the NL Cy Young Award winner and recorded a pitching triple crown. He is a two time National League ERA and Strikeouts Champion and a three time MLB All-Star. Peavy won a Rawling Gold Glove Award in 2012. He holds a record for most career strikeouts for the San Diego Padres and set a record with 16 strikeouts in a single game for the team.

Financial Issues: In 2016 Jake discovered that a financial advisor had siphoned $20 million from his retirement account as part of a Ponzi scheme. The advisor allegedly invested $33 million of various client money into an online sports and entertainment ticket business. He also paid himself a $2 million fee to transfer the money to the scheme. He also took out an additional $5 million worth of unauthorized loans in Peavy's name. Around the same time, Peavy's high school sweetheart filed for divorce which ultimately ended up being very costly as well.