Jake Arrieta net worth and salary: Jake Arrieta is an American professional baseball player who has a net worth of $20 million. Jake Arrieta was born in Farmington, Missouri in March 1986. He is a pitcher who bats and throws right handed. Arrieta played at Plano East Senior High School and was drafted by the Cincinnati Reds in the 2004 MLB draft.

He decided to attend college instead and played at Weatherford Junior College and transferred to Texas Christian University. He was again drafted in the 2005 MLB draft by the Brewers but chose to stay in college. Arrieta was named Mountain West Conference Pitcher of the Year and was a Second-Team College Baseball All-American. He was again drafted in the 5th round of the 2007 MLB Draft by the Baltimore Orioles where he played from 2010 to 2013. Arrieta has played for the Chicago Cubs since 2013. In 2015 he won the National League Cy Young Award and was the MLB wins leader. Arrieta has also pitched two no-hitters. He has represented the United States in international competition and won a Gold Medal at the 2006 World University Championship and a Bronze Medal at the 2008 Olympic Games. In 2016 Arrieta signed a one year deal for $10.7 million with Chicago. 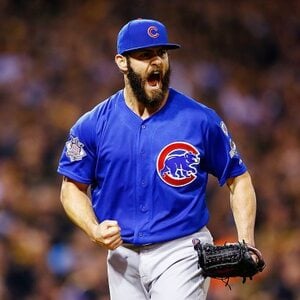