Rodriguez attended Lino Padron Rivera High School and immediately signed to the Rangers after high school. He is a fourteen-time All-star, thirteen-time Gold Glove Award winner, seven-time Silver Slugger Award winner, 2003 World Series champion, 1999 AL MVP, and 2003 NLCS MVP. Throughout his career, he has upheld a batting average of .296, a total of 2,844 hits, 311 home runs, and a total of 1,332 runs batted in. He officially retired on April 18, 2012 and has three children by the names of Ivan Derrek, Amanda Christine, and Ivanna Sofia. The Minnesota Twins drafted Ivan Derrek in 2011. Rodriguez and his former wife founded the Ivan "Pudge" Rodriguez Foundation in 1993, which aims to aide families in Puerto Rico, Dallas, and Fort Worth. 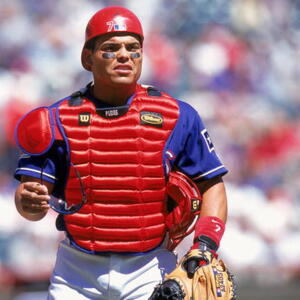