Ian Kinsler Net Worth: Ian Kinsler is an American professional baseball player who has a net worth of $50 million. Ian Kinsler was born in Tucson, Arizona in June 1982. Kinsler is a second baseman who bats and throws right handed. He won state championships with his Canyon del Oro High School team in 1997 and 2000.

Ian was drafted by the Arizona Diamondbacks in the 29th round in 2000. He chose to play for Central Arizona College and was drafted by the Diamondbacks again in the 26th round in 2001. Kinsler decided to play for Arizona State University and then played for the University of Missouri. He was drafted for a third time in 2003 by the Texas Rangers in the 17th round. He made his debut for the Rangers in April 2006 where he played until 2013. Kinsler was named as part of the 50 greatest current players in baseball by Sporting News in 2009. He has twice hit 30 home runs and stolen 30 bases in the same season making him only one of 12 players in MLB history to do so more than once. Kinsler hit for a cycle in 2009 going six for six. He is a four time All-Star in 2008, 2010, 2012, and 2014. In 2014 he was traded to the Detroit Tigers. 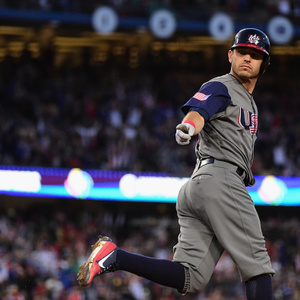