Hunter Pence Net Worth and salary: Hunter Pence is an American baseball player who has a net worth of $45 million. Pence, whose career spans over seven years, is a Major League Baseball outfielder for the San Francisco Giants. Born Hunter Andrew Pence on April 13, 1983 in Arlington, Texas, he exposed his baseball skills to the fullest while he was studying at the University of Texas at Arlington (UTA).

In his sophomore year, he was named a first-team all-conference outfielder. It was in 2002 that Pence was drafted for the first time by the Milwaukee Brewers in the 40th round of the Major League Baseball Draft that year, but did not sign. He made his pro debut five years later as the Houston Astros center fielder. He remained with the team until 2011 when he joined the Philadelphia Phillies for one season and then started playing for the San Francisco Giants in 2012. Batting and throwing right-handed, Hunter Pence took part of the 2012 World Series champions with the Giants. 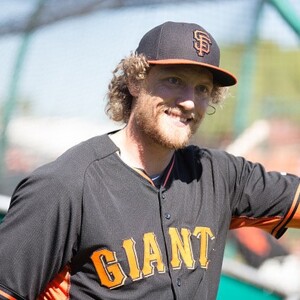